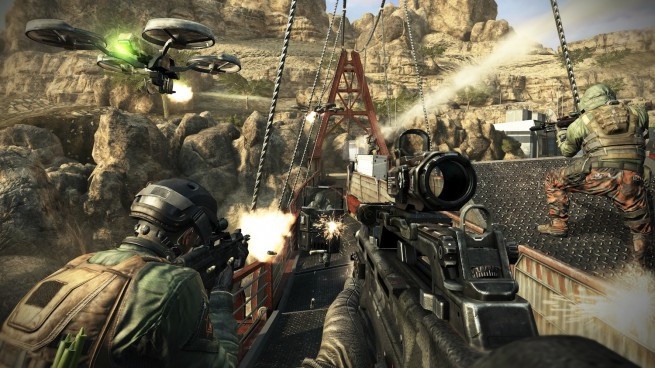 Call Of Duty: Black Ops II was without a doubt one of the most high profile first person shooter games of the early 10’s; it was the highly anticipated sequel of the first Black Ops game which was developed by Treyarch and published by prior to its released back in 2010. There were many defining features that were included in Call Of Duty: Black Ops II that intrigued many people back in 2012 including the setting of the game and how it lead players into the 2020’s decade. The plot started off in the late 80’s and took players into the year 2025 were they took control of two main protagonists named Alex Mason and Frank Woods. One of the more interesting aspects of Call Of Duty: Black Ops II involved the branching storyline features within the game which lead to at least seven different endings. The campaign mode for Black Ops II on average was somewhere between 6-7 hours long and the replay value for the game was high due to the multiple endings featured in the game. While certain endings Black Ops II saw the main protagonist Raul Menendez captured towards the end of the game players could also reach the canon ending in where the main villain meets his demise.

While the campaign mode for Black Ops II was strong the offline multiplayer gameplay which allowed up four players was also a strong positive; along with the ability for players maneuver aerial vehicles in addition to customizing their loadout before starting a mission. The visuals for Call Of Duty: Black Ops II looked absolutely stunning back in 2012 considering the fact that it utilized the Infinity Ward Engine the game technology that had been used other prequels within the CoD series such as Modern Warfare, World at War, Modern Warfare 2 and Black Ops I between ’07-’10. The concept of a Second World War made for fascinating science fiction story along with the inclusion of futuristic technology pertaining to the mid 2020’s. Even though, campaign for Black Ops II was non-linear to the determinant some people many loved the storytelling aspect of the game since it contributed to the game’s overall realism. Since its back in November 2012 Call Of Duty: Black Ops II managed to reach at least 7.5 million in worldwide sales while grossing approximately $800 million in sales within 24 hours of its release. Black Ops II has been ported to various game systems including the Xbox 360, PlayStation 3, Wii-U and Microsoft Windows since its release during the early 10’s. However, there are many people who would love to see a remastered version of Black Ops II for the PS4 or the Xbox One especially considering the fact that we are very close to year 2025.