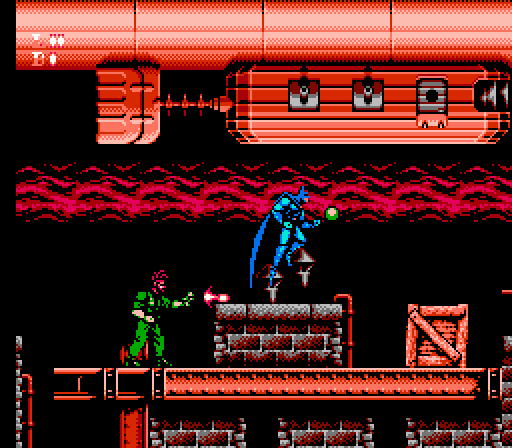 Batman: Return Of The Joker was a single player action game from the early 90’s that appeared on consoles like NES, Sega Genesis and Game Boy between ‘91-‘92. The Return If The Joker title was considered to be the successor to the original Batman game that was released between ‘89-‘90 which was based on the film from that time period. The interesting thing about Batman: Return Of The Joker was the fact that it was unrelated to the ‘89 film; along with the fact that it was more based on the Batman comic books from that era. Batman: Revenge Of The Joker was developed and published by Sunsoft and had a pretty basic plot that involved collecting dangerous metals that were stolen within Gotham City. The metals stolen by the Joker were considered to be dangerous since they were considered to be very toxic. Also, the metals stolen by the Joker in this particular game are normally used for the sole purpose of building explosives. While the original Batman NES title from ‘89 had five levels Return Of The Joker contained seven stages along with two sub-levels. Each stage with the exception of the second and the fifth levels had boss battles.

The visuals for Batman: Return Of The Joker looked pretty good considering the fact that it was a game from ‘91 opposed from the 80’s. Another strong positive for Batman: Return Of The Joker was the fact that the game was more challenging than its ‘89 predecessor. Also, the NES version was considered to more superior than the Game Boy port since it was more of a run n gun title opposed to simply being a platformer. At one point Sunsoft was supposed to release a Super Nintendo version of the game but it was never fully completed; as a result we only got a Genesis & Game Boy port outside to the NES version. Despite, the fact that Return of the Joker was not as popular other Batman installments from that time period like the ‘90 arcade game; it was definitely an entertaining title from the early 90’s during a time where 8-bit gaming was starting to become obsolete.