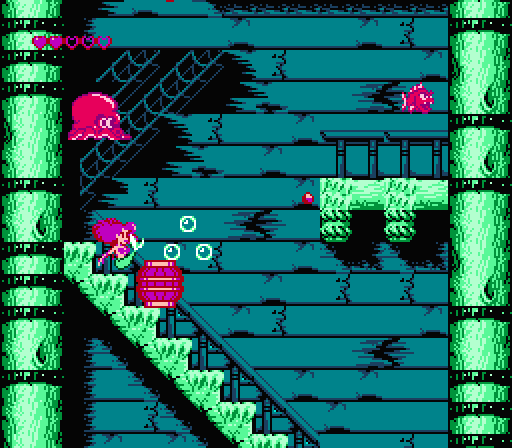 As a video game Little Mermaid from ’91 was a pretty basic action title were players would have go through numerous stages and deal with countless foes underwater. Players would have to compete stages including Sunken Ship, Sea Of Ice, Coral Sea along with Undersea Volcano before reaching Ursula’s Castle. Once players reached Ursula’s Castle players had to take part in two battles before officially completing the game in its entirety. Taking control of Ariel with a health meter consisting of five hearts and using aqua based offensive against underwater enemies was somewhat creative. Generally, in action games players attack their foes directly but Capcom tried to make the Little Mermaid game as kid friendly as they possibly could. Despite, how basic the gameplay for Little Mermaid for the NES was it managed to be an attraction to children who were familiar with movie; along with casual gamers who were fans of action titles in general. While we did get a video game for Little Mermaid on Sega Genesis in ’92; some would argue that it paled in comparison to the NES game despite having more superior quality in terms of visuals.