One of the few JRPG’s for the Super NES that may have her overlooked back in the mid ’90s was Star Ocean from ’96. For those who do not know Star Ocean was developed by video game company tri-Ace and published by Square Enix and was released exclusively in Japan during the summer of 1996. Unlike, some of the previous JRPG’s that Square Enix has published between the early to mid 90’s Star Ocean had features that made it stand out more on the SNES. Unlike games such as Secret Of Mana & Chrono Trigger it should be noted that Star Ocean was one of the few JRPG’s in the SNES that included voice samples. By the mid 90’s video games were able to push the limits of the 16-bit SNES and being able to do things that was previously thought to be impossible when the console was first released in 1990. The visual aspect of Star Ocean was also very impressive along with the plot which emphasized time travel. Star Ocean was a game that could have been very successful in the early 90’s especially since 2D JRPG’s were more popular during that time period. 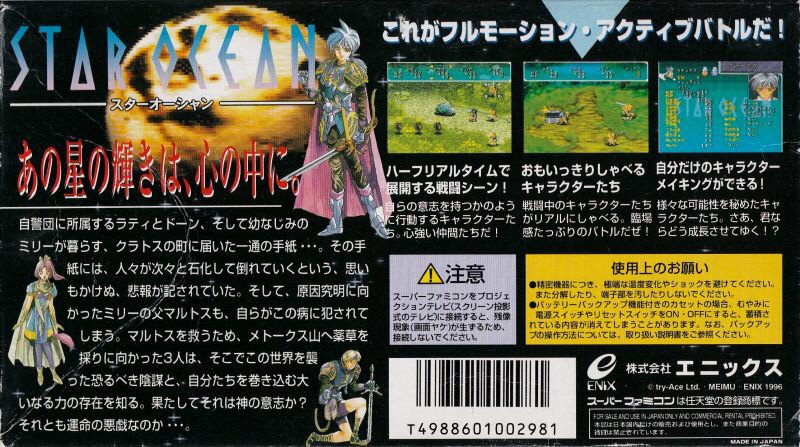 In fact, some people might of have been surprised that Star Ocean was released exclusively in Japan for the SNES especially considering the fact that the 16-bit console was starting to decline in popularity by the mid 90’s. Many have probably questioned why Star Ocean was not ported for the PS1 during the mid 90’s seeing popular Sony’s 32-bit console was during the time. Either way, despite how adventurous the plot for Star Ocean along with how polished it looked on the SNES it still may not have been a huge attraction in America back in 1996. American gamers were more fixated on 3D gaming along with titles such as Mortal Kombat & Killer Instinct that emphasized blood, gore and violence. While it made sense to keep Star Ocean as a Japanese exclusive during the mid 90’s the game still should have been released in America much sooner than it was. Star Ocean was not officially released in America until October 2008 before it appeared worldwide on PlayStation 4 & Nintendo in December 2019. If the original Star Ocean game appeared on the Game Boy Advance back in the early 00’s it could have been somewhat of an attraction on the 32-bit handheld console seeing how successful it ended up becoming during that decade.