During the console wars between Nintendo and Sega that took place throughout the 90’s there were so Man big titles that appeared both on the SNES and Genesis that were classics. Sparkster a game that was both developed and published by Konami and released in ’94 may not necessarily be considered a classic by many people ; but it was still a solid platform shooter game during its time on the SNES. Sparkster was considered to be the direct sequel to Rocket Knight Adventures which came out back in ’93 exclusively for the Sega Genesis. As far as visuals and sprites were concerned many people would argue that Sparkster was more superior than Rocket Knight Adventures was on the Genesis console. Also, the soundtrack from Sparkster was pretty good especially the first stage which was arguably one of the most underrated 16-bit theme songs from the early 90’s. The plot for Sparkster was pretty basic and involved the Rocket Knight known as Sparkster trying to rescue a princess by the name of Flora within the kingdom of Eginasem. 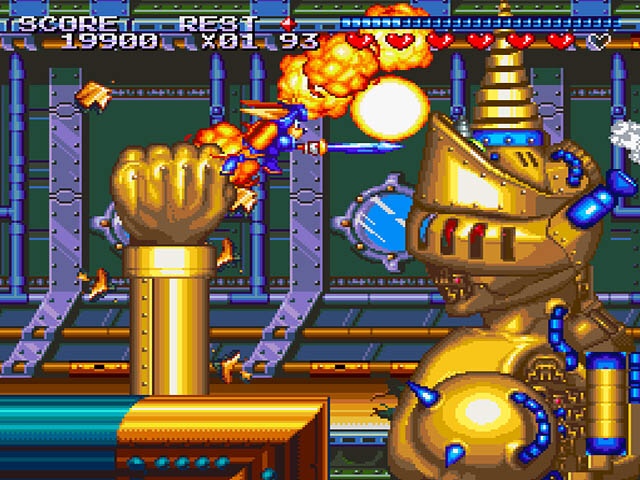 The goal of rescuing Princess Flora comes with trying to overcome an onslaught of animal-based soldiers affiliated with the Lioness army; while dealing with a key antagonist known as Rocket Knight Axel Gear who aligned himself to take down Sparkster. The formula used in creating this game seemed intriguing since it took elements from popular platform games if the early 90’s and blended them into one. The damsel in distress element is one that has basically definite Super Mario games since its inception back in the mid 80’s. The idea of having a rival/nemesis to make life more difficult for the main protagonist is somewhat similar to what we got in Sonic the Hedgehog 3 back in ’94 when Knuckles The Echidna made his video game debut. The side scrolling shooter element of Sparkster felt somewhat similar to that of Mega Man X which was released for the SNES back in ’93. Following its initial release the feedback that Sparkster received a positive reception from critics for being an improvement over its predecessor. Despite, Sparkster not being on the same level as games such as Super Mario World, Mega Man X, Super Castlevania IV in relation to the platform genre its still a retro 16-bit that some people are still quite fond of to this day.