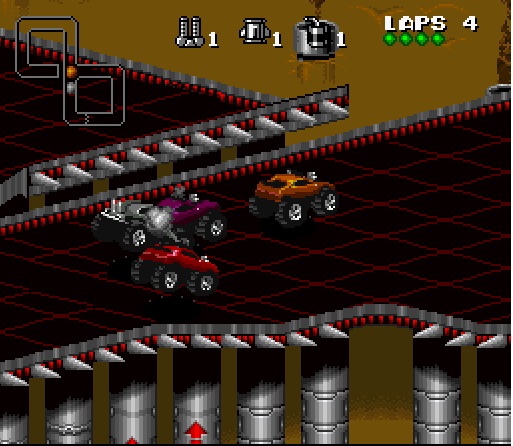 Back in the 1990’s racing games were so much fun  especially those during the 16 bit era that were available on home consoles like the Super Nintendo or the Sega Genesis.  When we think about some of the most coolest games for the Super Nintendo Entertainment System a few titles come to mind including Rock n’ Roll Racing .  During the early 90’s  when Blizzard Entertainment developed Rock n’ Roll Racing the concept for the game was very interesting.  While players race against three other opponents they are expected to do everything they can to win the race including making various attempts to destroy their vehicle using weapons.   The process of earning money in the game was a nice feature because it allowed players to improve their vehicle as they prepared for more difficult races.  Along with the gameplay and the ability to earn money in races Rock n’ Roll Racing arguably had one of the best soundtracks that anyone would hear on a SNES racing title.

The soundtrack for Rock n’ Roll Racing along with the commentary made the gameplay much more exciting because it was unlike anything that anyone would see in a general racing game during the 16 bit era.  The isometric view that was utilized in Rock n’ Roll Racing was probably the most unique feature in the entire game.   Not only did the isometric view make Rock n’ Roll Racing stand out from other games within its genre but it also deviated from the traditional third person racing style of gameplay that were popular during the early to mid 90’s.  As cool as Rock n’ Roll racing was some would agree that the game itself was difficult to play.  Some would agree that playing games like Rock n’ Roll racing would be much easier  on a control stick opposed to a D-pad.  Even though, steering and controlling the vehicles in this game may be difficult for some people its also one of the many things that makes Rock n’ Roll Racing very exciting.  Combining elements of fantasy with reality along with having a good soundtrack had made Rock n’ Roll Racing an unforgettable classic for anyone who grew up during the 16-bit era of gaming.