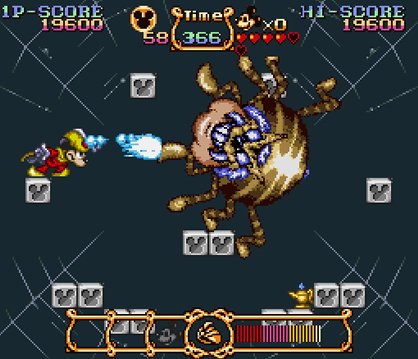 There is nothing like the classics when it comes down the 16 bit retro gaming and The Magical Quest Starring Mickey Mouse is a platform title that many people enjoyed for the Super Nintendo Entertainment System following its release in 1992.  This graphics and visual effects for this game was great for the SNES considering the fact that it was developed by Capcom.  While the Magical Quest  has a very basic plot the developers were very creative when came down to some of the in game mechanics of this game.  In the Magical Quest Mickie Mouse has the ability to jump on monsters along with being able to throw items at them similar to that of Super Mario Bros 2.  Also, similar to Super Mario Bros I & III Mickey can change into different costumes to gain special abilities to defeat monsters.  Whether Mickey is dressed up as a magician, firefighter or mountain climber the ability to utilize different costumes in certain stages adds variety to the game itself which makes it stand out from being an ordinary platform title.  As players progress throughout the game to rescue Pluto and to confront King Pete the pass through some fun but tough levels in the game.

Even though, some people might believe that the Magical Quest was an easy platform title there were a few levels in the game that seemed a bit harder than they looked.  The boss battle in Stage 1-4 was tough because players had to attack the monster at least eight times in order to defeat him which was a task that was easier said than done.  Also, the boss battle in Stage 3-4 seemed difficult because players could not think on their feet they can easily lose the fight for they even realize it.  The Magical Quest Starring Mickey Mouse is actually a long game and even though some of the opening stages appear to be simple the boss battles are tough and they manage to get harder as you get towards the end of the game.  Along with having a nice overworld map prior to the start of each stage the designs for each level seemed fantastic.  While many people enjoyed the SNES version of The Magical Quest there were also some who enjoyed the Game Boy Advance port which was released in 2002 and featured Minnie Mouse as a playable character.  At the time it was pretty cool to see a Capcom game that featured Disney characters such as Mickey Mouse, Goofy, Donald Duck and Pluto.  Disney’s Magical Quest may not have been considered to be one of the best platform games for the SNES but it was definitely a memorable one for those who were true Disney fans.