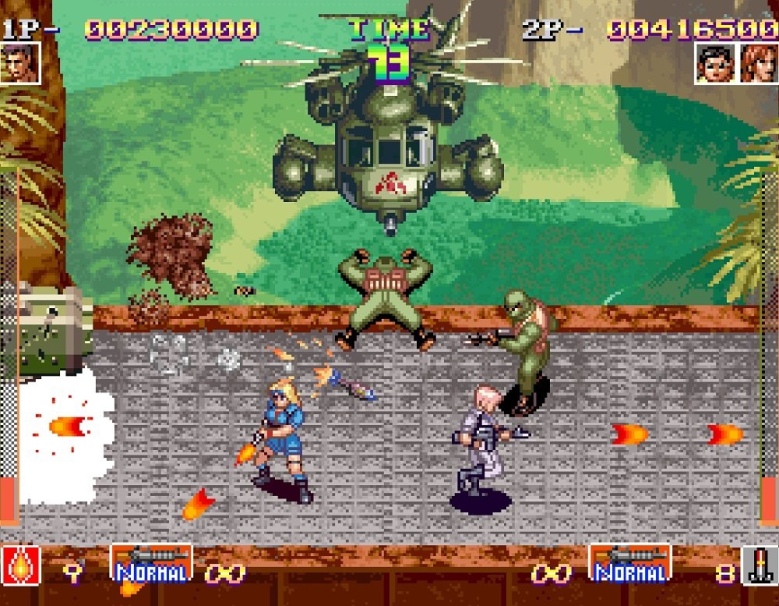 When it comes down to classic run n gun games from the 90’s one of the few underrated games that flew under the radar for that decade was a title developed by Saurus and published by SNK. A title known as Shock Troopers which came out in ’97 for the Neo Geo MVS was one that looked very impressive in terms of visuals be a it had a arcade like to it. As far as 2D run n gun titles are concerned Shock Troopers was unique because it felt like a cross between a run n gun along with a beat em up. There were games back in the late 80’s-early 90’s that were side-scrolling run n guns on the Super NES & Sega Genesis like Contra that were very popular. By the mid 90’s 2D run n gun genre started to decline in popularity especially since 3D gaming became higher in demand during that time. Shock Troopers was a run n gun that included a total of seven different levels with each of them ending with a boss battle. The game also had a pretty basic plot where players had to thwart the evil plans of a terrorist group known as the Bloody Scorpions.

In Shock Troopers players had to rescue a scientist who has been kidnapped along with his daughter in order to gain access to a powerful drug known as Alpha-301. The Alpha-301 drug was considered to be dangerous because it the ability to change human beings into super human soldiers. Along with the visuals and gameplay Stock Troopers was appealing because it was co-op multiplayer run n gun that was challenging in arcade centers. Its a shame that Shock Troopers was never ported for the PS2, PS3, Xbox or Xbox 360 during the 00’s. However, Storm Troopers was not on the same level of popularity as the older Metal Slug games that appeared on the Neo Geo home consoles. Storm Troopers was a game that could have definitely been more popular between the ’91-’94 time period on home consoles due to its arcade like quality. Storm Troopers received good reviews from various gaming publications for its 2D quality and its adaptability in terms of difficultly. While Storm Troopers could have been an somewhat of an attraction on the PS1 during the late 90’s; it could have been easily overshadowed by various titles on the 32-bit console.