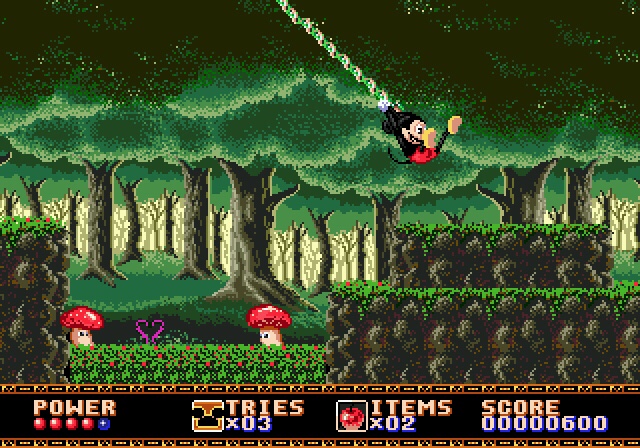 When it comes down to platform classics for the Sega Genesis one of the few games that instantly comes to mind is Castle Of Illusion Starring Mickey Mouse from 1990. Castle was arguably one of the first major platformers to have appeared on the Sega Genesis/Master System before Sonic the Hedgehog blew up in popularity from ’91 onwards. Castle Of Illusion was a platformer with a basic plot that involved Mickey Mouse attempting to rescue Minnie Mouse from a wicked witch by the name of Mizrabel. In order defeat the wicked witch Mickey is required to collect the Seven Gems Of The Rainbow from various levels throughout the game which are considered illusions. In order to complete his quest along with rescuing Minnie Mouse players must deal with various foes throughout the game including the Masters Of Illusion and other strange creatures in the game. The cool thing about Castle Of Illusion is the fact that it felt somewhat similar to a Sonic game for the series even began. 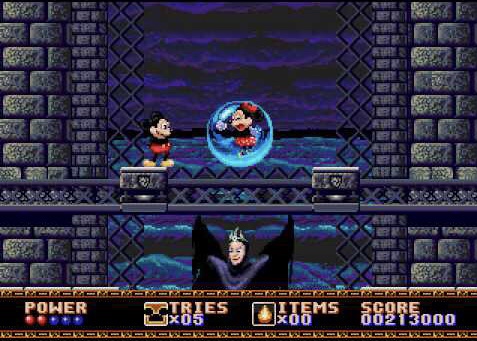 The concept of collecting seven gems similar to how Sonic the Hedgehog collects seven Chaos Emeralds was pretty cool. Also the idea of saving Minnie Mouse In Castle Of Illusion was somewhat similar to how Sonic the Hedgehog had to save Amy Rose in Sonic CD a game that did not come out until ’93 for the Sega CD. While the 16-bit graphics for Castle Of Illusion was a strong positive for this 90’s platformer some criticized the game for being to much like Super Mario in terms of gameplay. In order to defeat enemies players were general required to bounce off of them while being able to toss items such as marbles and apples at them. While Castle Of Illusion was not as complex in terms of gameplay as other platformers from the 90’s it still managed to be a huge attraction for the Sega Genesis. Mickey Mouse as been a pop icon since the 1930’s and was a familiar face that almost everyone knew about; seeing him on the 16-bit Genesis console back then was pretty epic. Castle Of Illusion was so popular to a point where it received a remake which eventually appeared on the PlayStation Network, Xbox Live Arcade along with Microsoft Windows back in 2013. While Castle Of Illusion Starring Mickey Mouse May not have been the number one platformer for the Sega Genesis; but it was a game that was mainly critically acclaimed back in the 16-bit era that people still talk about to this day.