As people know the original Jurassic Park movie was directed by Stephen Spielberg is considered to be legendary following its release back in 1993. The first Jurassic Park movie had a budget of at least $63 million and was considered to be a massive box office success following its release. The movie became so popular to point where Jurassic Park had received its own video game for the Sega Genesis in ’93 as well. The Jurassic Park game that we got for the Sega Genesis was developed by BlueSky Software and published by Sega and was a side-scrolling action-adventure title that only allowed single-player gameplay. The Jurassic Park game for the Sega Genesis allowed players to control Dr. Alan Grant the main protagonist for the movie along with a Velociraptor as they try to complete various levels within the game itself. Players were mainly given three lives to complete the entire game while players had to defend themselves against various adversaries & threats in the form of dinosaurs throughout the game. As Dr. Alan Grant weapons such as stun guns, has guns, tranquilizer guns and more were used to help players achieve their main objective in moving on to the next level. 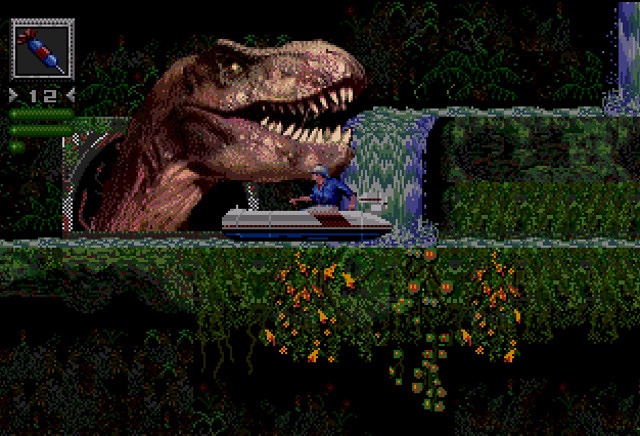 While Dr. Grant’s main goal for each level is to stay alive when facing the dinosaurs the Velociraptor must deal with opposition from security guards. While controlling as the Velociraptor for certain levels players have to evade or destroy the security guards who have multiple weapons at their disposal. Players can use the Velociraptor to destroy its enemies by attempting to eat the security guards and doing what ever it takes to complete each stage. Even though, some people thought that the Genesis version from ’93 was cool others were fans of the SNES version of the game because of its graphics and its top-down perspective in terms of gameplay. While more people may have been fans of Ocean Software’s Jurassic Park game for the Super NES the the Genesis version from ’93 may have been one of the better action-adventure titles to have appeared on Sega’s 16-bit console during the early 90’s.