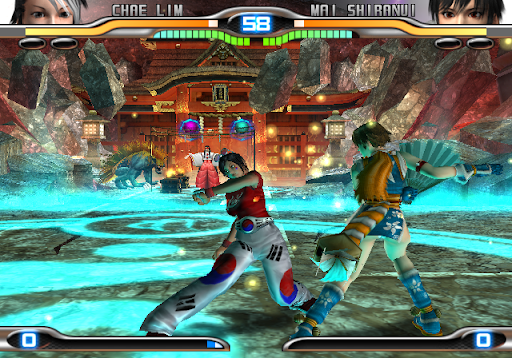 When many people think about some of the most iconic games to have come from the KOF series some of the installments from the 90’s come to mind. In fact, KOF ’98 was arguably the greatest fighting game that SNK made and was probably one of the best 2D arcade fighting titles of all-time. While SNK’s games within the KOF series has improved visually as time progressed many gamers are only aware of the 2D installments from the 90’s, 00’s and the 10’s decade. Following the release of KOF ’98 we got to see critically acclaimed 2D entries such as King Of Fighters XI-XIV between ’05-’16. However, the 3D KOF games do not get mentioned nearly as much as the 2D installments; which is understandable considering the fact that the series began in 2D towards the mid 90’s. After KOF Maximum Impact 2 was released in ’06 there were casual gamers who may have been impressed with features such as 3D gameplay along with character voice overs during story mode cutscenes. The gameplay for KOF: Maximum Impact 2 felt similar to that of a Soul Caliber which was cool considering how popular the Soul series has become during the 00’s.

King Of Fighters: Maximum Impact 2 looked and felt way different from many other installments within series; similar to how the Street Fighter EX did from every other 2D SF title from the 90’s. While some fans thought that making a 3D KOF game with voice acting was a step in the right direction others felt that titles such as Maximum Impact 2 deviated away from what made the series popular during the 90’s. For a 3D fighting game KOF: Maximum Impact 2 looked pretty decent by mid 00’s standards and would probably turn heads within the gaming world it was remastered in high definition. However, the demand to see a remastered version of KOF: Maximum Impact 2 is not very high especially since there are much better games within the series that the public adore even more.