As far as beat em up classics from the 90’s are concerned one of the most popular titles that we got to see back in the day was the Streets Of Rage from 1991. The original Streets Of Rage game was developed and published by Sega and was one that competed with Nintendo’s Final Fight series back in the early 90’s. As far as quality and overall lasting appeal is concerned many people would argue that it was not quite as popular as its ’92 successor Streets Of Rage II. Unlike, sequel the original Streets Of Rage game had 8-bit like graphics that looked that looked inferior but nonetheless had a basic but interesting storyline. Players have the option of choosing three ex-police officers Adam, Blaze Fielding and Axel Stone in order to combat chaos in a unnamed city taken over by criminal syndicate lead by Mr. X. One of the most memorable aspects that Sega presented in Streets Of Rage was its soundtrack which was produced by the legendary Yuzo Koshiro. There were songs such as Fighting In The Street, Moon Beach, Violent Breathing that were included in certain stages and added life to the game itself and are still somewhat popular to this day. 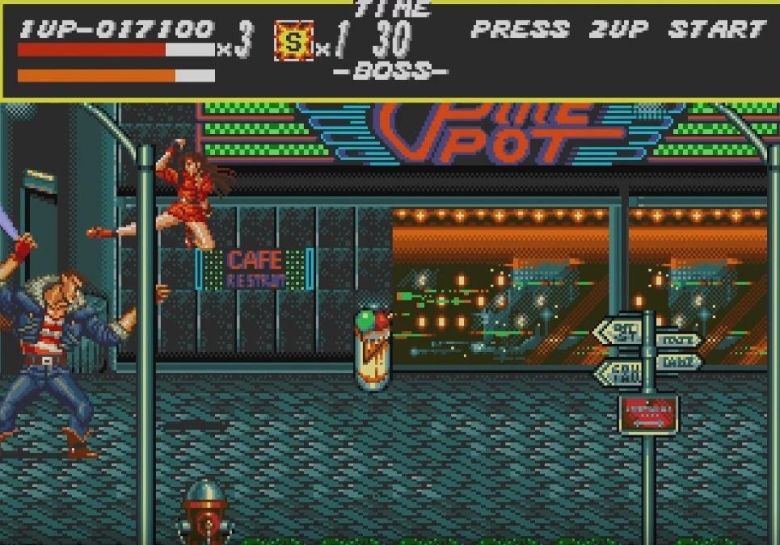 Also, the fact that Street Of Rage had included multiple endings was something that added to the game’s overall replay value. The original Streets Of Rage game gave players the option of defeating Mr. X towards the end versus having both players fight against each other within its co-op mode. If the player who joins Mr. X defeats the one who does not they get the bad ending. The player who refused to join the crime syndicate had to defeat the disloyal protagonist along with Mr. X in the end thus making the good ending even more difficult to achieve. In fact, as players progress towards the end of the game each became increasingly more difficult which made Streets Of Rage a more exciting beat em up title altogether. As far as Mega Drive classics are concerned Streets Of Rage is a title that within the top ten of many people’s list in relation to 16-bit games from the early 90’s.