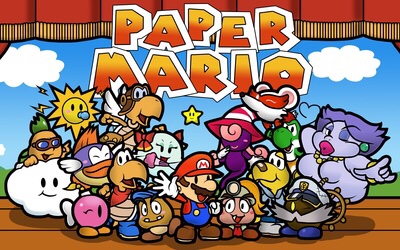 When it comes down to memorable classics that appeared on the Nintendo 64 there are many who instantly think about Nintendo’s Paper Mario game that was released back in August 2000. For those who do not know Paper Mario was an RPG which was considered to be the closest thing to a sequel that we got following the release of Super Mario RPG back in March 1996. As far as visuals and gameplay are concerned Nintendo had to go in a different direction with Paper Mario especially considering the fact that they collaborated with Square Enix for the development Super Mario RPG. The fallout that Nintendo had with Square Enix in the mid 90’s forced the company to use Intelligent Systems as the developer for Paper Mario while Shigeru Miyamoto remained a key producer for the game. Aside from the fact that Bowser was the main antagonist along with the setting being in the Mushroom Kingdom Paper Mario was a very interesting game because we got to see something new. While players controlled Mario for a majority of the game in his quest to rescue Princess Peach and the Seven Star Spirts they also have the option to partake in optional side-quests as well. In some of the side-quests players had the ability to control Princess Peach in certain parts of the game which some people might have enjoyed.

Nintendo’s idea of making characters enemy-like characters such as Parakarry and Goombarino into allies to assist Mario in quest was pretty unique and it made for interesting gameplay while try to compete it. Since its release back in August 2000 Paper Mario managed to reach over one million copies in sales and has been widely regarded as one of the best JRPG titles for the Nintendo 64. Despite, not being in the top 25 in relation to best selling video games for the Nintendo 64 Paper Mario was still a title that seemed like a decent follow-up to the Super Mario RPG game that came out in 1996. After all, the sequel that we got in 2004 known as Paper Mario: The Thousand Year Door became even more successful on the Nintendo GameCube. Paper Mario: Thousand Year Door reaches over 2 million copies in worldwide sales and ended up becoming the ninth best selling title for GameCube in general. The Paper Mario series has been around for over fifteen years now with five main installments and the series is still an attraction to Nintendo fans to this day.