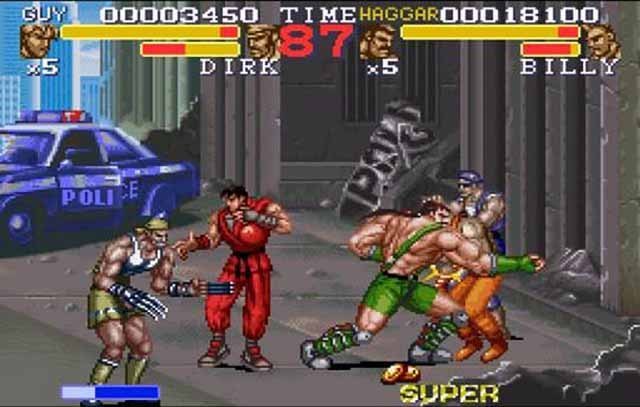 Final Fight 3  is a beat em up game that was released for Super Nintendo in 1995.  This game had marked the third installment in the Final Fight series.  In Final Fight 3 the plot revolves around a new criminal organization called the Skull Cross who have taken over Metro City.  In this game the main characters Mike Haggar, Guy, Lucia, and Dean have to stop the gang and make theme pay for their crimes.  The plot for this game is slightly darker than the first two games because Dean’s family was murdered by the Skull Cross gang which makes things more interesting.  This game provides a co-op mode where one player can either beat the game with another or with the CPU.

The gameplay for Final Fight 3 is significantly better than the first two games especially with the addition of a super meter which allows different characters to pull off unique moves that takes up a significant amount of damage.  The feature of having super meters was popular in games such as Super Street Fighter 2 Turbo which added to the excitement of this title.  This game may appear to be repetitive as many other beat em up fighting games with generic plots and repetitive gameplay involving different stages; but some people who have played the game still find it challenging.  While Final Fight 3 might not be the most popular title of the series some people would argue that is was an underrated beat em up game which had improved dramatically in comparison to its prequel.