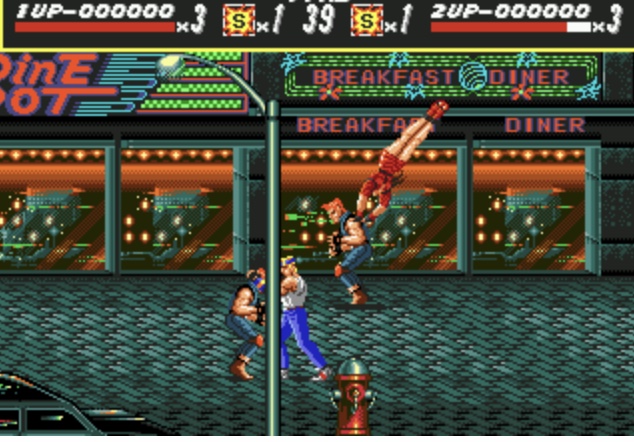 Streets of Rage just like any other beat em up game involves traveling throughout various stages and defeating a gang of enemies along with defeating the main boss at the end of each stage.  Once players reach the final stage they then face off against the main antagonist Mr. X.  If Streets of Rage is played on co-op mode both players have the option of either joining the crime syndicate or taking down Mr. X.  If both players make opposite choices they end up having to fight each other to the death before fighting Mr. X.  If one player defeats Mr. X after killing his partner they become the new leader of the crime syndicate leading to a bad ending for the game.  However, if both players decide to stick together and defeat Mr. X the game shows a good ending where the crime syndicate is stopped temporarily.

Streets of Rage is known for many qualities including its gameplay and musical composition.  The soundtrack for the game was developed by Yuzo Koshiro who had created many memorable songs for each stage for both Streets of Rage 1 & 2.  The original Streets of Rage game was fun, family-friendly and appealed to many casual fans of the beat em up genre.  Streets of Rage is considered to be a classic among many Sega fans and the series would only improve during the development of the  second installment.